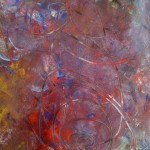 As part of a Twitter project (http://twitter.com/carlowetns/twexp1), 20 schools are tweeting about the most expensive painting in the world.  No, it’s not the Mona Lisa by Leonardo de Vinci or even Van Gogh’s Sunflowers; it’s Number 5 by Jackson Pollock, which was sold for $140m in 2006.  The painting is an abstract one so it might not be to everyone’s taste.  In fact, only one Junior Infant liked the painting!  As a whole school, we decided that we could do better than Jackson Pollock and made our own Number 5 inspired paintings.  We learned that Jackson Pollock didn’t just use a paintbrush for his paintings – he used lots of different media.  We used Lego bricks, sponges, our hands, unifix cubes, 3D shapes and straws to create really cool effects.  Pictured here is one of our pupil’s efforts.  To see more, simply go to our Twitter project site and see what all the different schools are doing.