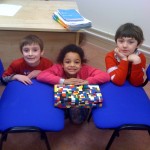 With several man hours, a number of false starts and lots and lots of problem solving, today Billy put the final piece of Lego into our Lego Bridge.  We were all really surprised by how strong it was!  Two children even gave it a punch and it held still.  We placed lots of different items on the bridge and it held.  The children decided that 6 layers was enough to make our bridge strong enough and they were right.  The bridge itself measures 48 dots in length and 20 dots in width.  About 12 children were involved in the project and many interesting conversations were had, particularly during the planning stages.  Aoife came up with the idea of building the outside walls first and filling them with Lego.  She then suggested that we laid layers on top of this.  Some of the younger children realised the importance of placing lego bricks on top of the gap between two bricks so it would keep steady.   Once the first two layers were up and running, it was easy to finish.  Well done to all the children from 1st class to 4th class for their hard work!  The Lego bridge can see seen and tested out in Emer’s class.