Application to open new school will proceed. Educate Together has confirmed that they will be applying to open a new national school for 2008. They now exceed the required number of children pre-enrolled in order to be considered by the New Schools Advisory Committee. Parents were out in force at Educate Together’s pre-enrolment evening in […]

Thanks to all the people who came along to our pre-enrollment evening in Graiguecullen G.A.A. club.  It was a great success and it was fantastic to receive such support.  We are entering exciting times now, as a committee.  Also, a big thank you to Minister Mary  White, T.D. for her support again this evening.  We […] 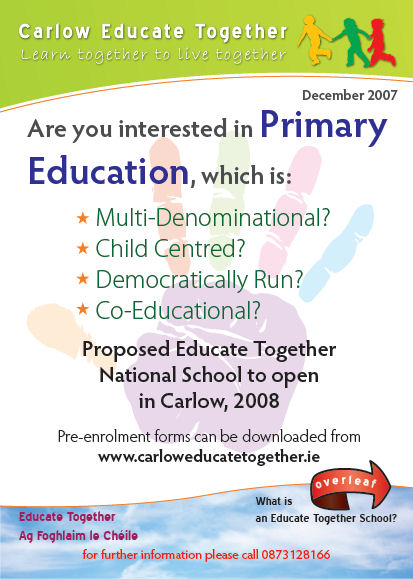 Carlow Educate Together hopes to open its doors in September 2008. To pre-enrol your child, please download our pre-enrolment form. To the left is a preview of our latest flyer, which gives information about the proposed new school. Click on the image to download it.