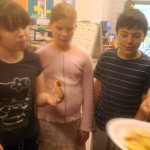 At today’s assembly Simon talked about two festivals that had happened in the last week or two.  They were, Eid, the Muslim festival celebrating the end of Ramadan and Rosh Hashannah, the Jewish New Year.  Some of the children in Junior Infants told us about a big party they went to for Eid.  Simon told the children about how Jewish people wish each other a “Shana Tova” (Happy New Year) and they also eat apple dipped in honey to symbolise a sweet new year ahead.  However, Simon forgot about another festival that happened this week – the Ploughing Championships, which were held in our neighbouring town of Athy.  Oisín and Aaron went to the festival on Wednesday and told us all about the different exhibitions and shows that went on.