Carlow ET Gaelic football team had their first outing in the Cuman na mBunscoil Championship last Thursday, 13th September in the GAA grounds in Fenagh. The emerging Carlow side faced the established footballers of Newtown-Dunleckney in what proved to be a game of three halves.

Educate Together defended well in the opening minutes of the match, with some good clearances from Christopher and Adam. However Newtown-Dunleckney found their target 4 minutes in, with the ball sailing over the cross bar to give them their first score of the match.

Some masterful kick-outs from the goalie Zoe Whelan got Carlow back into the game, with the midfield duo of Rory McNulty and Rory Walsh battling hard to win the ball. But Newtown’s experience shone through and they attacked the Carlow defence again, pointing lots of kicks

The second half started well again for Carlow, with the determined side getting stuck in straight away. Carlow passed the ball well, with some great hand-passes between Rhys and the McGee brothers,. Unfortunately for Carlow the tough opposition kept pushing at the goal. Goalie Zoe made some superb saves, forcing Newtown to aim for points instead.

Lauren Nolan Culleton broke the ball down well in midfield and moved play into the Carlow forward line, but the Newtown backs maintained their strength and defended well. 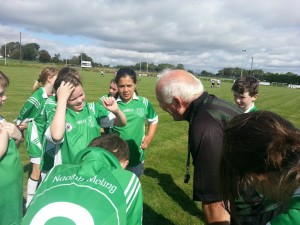 In the 3rd half the Carlow forwards pulled back to midfield to help out, and this provided some well needed relief for the backs. Great encouragement from Rory McNulty kept Carlow’s morale high, despite the growing score line for the opposition. Seamus Keena put on the goalie gloves for the final installment of the game freeing Zoe up to help out in the backs. Natasha McNeill made a great block, denying Newtown a final point.

Full back Christopher made some excellent clearances, and in the final 5 minutes Rory McNulty broke through the Newtown midfield only to be dispossessed by their defenders.
The forwards Nathaniel, Daniel, Lauren and Seamus had good performances but didn’t see much of the ball because of Newtown’s superior play.

Carlow benefitted from having great subs on the bench in the form of Chloe Brennan, Jack and Ryan McGee, Rebecca Mitchell, Jack Nolan, and Sorcha Peters.

Speaking after the game, Newtown Dunleckney coach Muiris Bric commented that “Today, in Fenagh, history was made”, with Carlow Educate Together playing in their first ever football match.

Carlow play Tinryland N.S. in their next match in Graigcullen GAA grounds this coming Friday 21st September, at 1.30pm.