Simon’s class have been learning all about Japan over the last couple of weeks.  As part of our Peace Education (in our Learn Together programme), we studied the A-Bomb that was set off in Hiroshima.  We learned that the Japanese, instead of retaliating, decided to rebuild the city and dedicate it to peace.

Every week, the mayor of Hiroshima writes a letter to every country who develop nuclear weapons and perform nuclear bomb tests to ask them to stop. 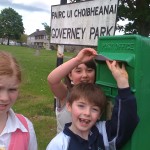 There is a flame burning in the middle of Peace Memorial Park in Hiroshima and it will not be quenched until all countries cease nuclear testing and development.  We learned that South Africa is one country that has done this.

As a class, we wrote a letter to 5 embassies asking them to stop nuclear bomb testing.  The children wrote their own letters, addressed the envelopes and walked to the post box to deliver them.  We await responses!